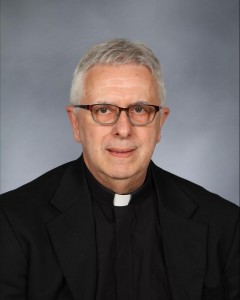 Waters of Baptism flowed over my head in St Joseph’s Church in Cottleville, Missouri.   Seven Holy Founders School provided schooling with a bunch of baby boom children.  At SHF I received the sacraments of Reconciliation, First Eucharist, and Confirmation.  St. Joan of Arc School prepared me for academic challenges from unfamiliar Jesuit priests.   After a year at SLU I donned the Jesuit cassock in the novitiate in Florissant, Missouri.  I checked out Chicago Style Pizza  and cheesecake for three years while I studied theology in Hyde Park.  After those 3 years I received the Sacrament of Ordination in the Chapel at SLUH.  For 14 years, off and on, I worked at Rockhurst High School, teaching English, leading retreats, service projects, celebrating masses, and serving as Rector. Regis Jesuit High School was home for me for five years as assistant Principal and Principal.  Going down under for a year was an unforgettable experience at Saint Ignatius High School-Riverview where I learned about Rugby. Jesuit life and high schools gave me a chance to feel so totally at home down under.   Doctoral studies in Clinical Psychology at George Washington University allowed me to live at the Jesuit parish rectory in Georgetown for three years and enjoy the cultural life of DC.  Returning to Saint Louis opened up opportunities as a clinical psychologist at Loyola Academy and the Counseling Center at Saint Louis University and a private practice.  In 2015, after peregrinations around the U.S. and Australia, I came almost first circle back home, to the first Jesuit high school west of the Mississippi where generations of J’s pushed frontiers of excellence in knowledge and faith.  Ready for a new adventure in 2018 I find myself at the third oldest Jesuit college in the United States.  I am Rector of the Jesuit Community and active in Mission and Ignatian Identity at the College.